“There has been shift in capex. CPE is coming down as a percentage of the total and network investment is going up slightly,” noted Neil Smit, who just transitioned from his role as CEO of Comcast Cable to Comcast Vice Chairman, speaking to investors during Comcast’s fourth-quarter earnings report.

MoffettNathanson, Comcast spent $3.665 billion on capex tied to customer premises equipment in 2016, compared to $3.698 billion in 2015, as it began to finally slow the distribution growth of its vaunted X1 video platform. Next year, based on company figures, MoffettNathanson expects Comcast’s CPE capex to only total around $3.2 billion. 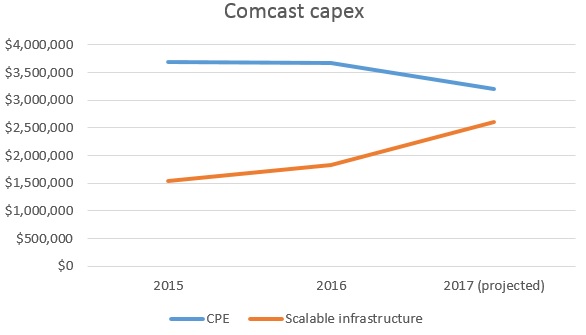 Of course, Comcast and Charter aren’t the only two companies in the cable business. But combined, Comcast and Charter now control 81% of cable broadband connections in the U.S. and nearly 82% of cable video subscriptions, according to Leichtman Research. Analyzing their spending provides a solid framework for analyzing cable industry capex overall.

Smit tied the rise of cable capex directly to the need for network upgrades, as cable companies respond to customer demand for more bandwidth.

“I think that the capital intensity of CPE will continue to drift downward as a percentage and that the network capacity will continue to go upward,” Smit said, according to a Seeking Alpha transcript. “So, in 2016 we went from 55-gigs per household median usage up to 88-gig average, a 55% increase, and that's a good thing. We want we want to see that happen.”

Notably, as Comcast and other MSOs take fiber closer to the premises, capex tied to line extensions is growing. Comcast line extension capex is expected to increase this year by 55.8% over 2015 to $1.381 billion.

“People are placing more value on our network,” Smit added. "So, we’re very positive about that and we’ll continue to invest there… I think it’s reasonable to assume that capital intensity may drift downwards, but if we see opportunities we’re going to jump on and certainly the network capacity and the business services aspect of capex will continue to invest in because we see good growth and good margin there.”

Charter’s capex equation is slightly more complicated, due to its integration of Time Warner Cable and Bright House Networks, as well as its continued all-digital conversion, which is slated for completion at the end of 2018. 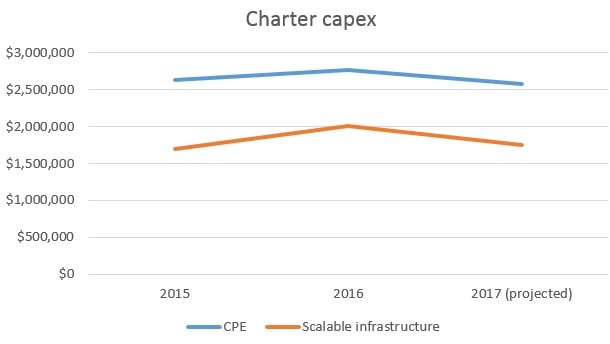 See below for additional figures on Charter's capex.

“So there will be some capex associated with that rollout,” he added. “The bigger portion of capex this year is going to be driven by a higher amount of CPE and placement cost for Spectrum pricing and packaging connects, because, A, we expect sales in connects to be higher as we've already seen in the markets where we've gone; and B, when we do an install under Spectrum pricing and packaging, there's a higher number of devices that we're placing in the home because of our two-way set-top box strategy as well as our strategy not to charge for modem rental and to have reasonable router fees. This means that you're going to put more capital into the home on a average transaction, and we expect to have higher transaction.”