Navistar Defense on Monday said it had acquired its assembly plant in West Point for an undisclosed amount. The company has leased the facility from Babcock and Wilcox since 2006.

“The purchase of the assembly plant is a part of our strategic plan to grow our business,” said Ted Wright, Navistar Defense chief executive officer. “With the hard work of the local workforce, Navistar Defense has manufactured tens of thousands of vehicles at this facility since 2006. This acquisition shows our commitment to the West Point community and to Mississippi.”

The West Point Assembly Plant has been Navistar Defense’s primary manufacturing site since 2006. The company calls the plant its hub for the manufacture of it line of military vehicles, which are sold worldwide. The plant is located on 161 acres and has 562,000 square feet of manufacturing, storage and office space comprised of five multi-purpose, moving assembly lines.

“This facility has the ability to produce armored and unarmored tactical vehicles from the ground up,” said Wright. “Beyond that, the plant’s large capacity offers the potential to manufacture a variety of products in addition to our core product lines.”

“West Point is pleased that Navistar Defense has made a long term, permanent commitment to our community,” said West Point Mayor Robbie Robinson. “We look forward to working with Navistar Defense for the good of our city, state and nation.”

Navistar Defense in December was awarded a $24.5 million contract to provide medium tactical vehicles to foreign military sales customers worldwide, except for Iraq.

Work will be done in West Point, with deliveries starting in 180 days after receipt of each delivery order.

The three-year requirements contract, awarded by the U.S. Army Contracting Command, is comprised of 6X6 general transport trucks and 6X6 wreckers, along with spare parts and technical data for both variants.

Navistar has been contracted to provide MTV variants to Iraq since 2017.

Advanced Technical Services has successfully completed a re-certification audit by NSF in May of 2018.

The certification verifies that the Quality Management System implemented and maintained by ATS meets the requirements of the ISO 9001-2015 standard for our repair processes.

ATS has been ISO certified since 2007 and is proud of the ongoing commitment from our entire team.

Advanced Technical Services announced that they have been added as a new cable distribution equipment repair facility for Mediacom Communications.

When asked about the addition, ATS Company President, Dave Vikartofsky, said that “being an authorized repair facility for Mediacom Communications will allow us to expand our repair offerings to a new customer base allowing us to continue to grow our support services within the cable industry”.

Advanced Technical Services announced today that that they have added Play Network to the list of Entertainment Industry customers they are now supporting.

When asked about the addition, ATS Company President, Dave Vikartofsky, said that “we are excited about the opportunity to help support Play Network with their equipment repair needs.”

The addition of Play Network allows us to expand the breadth of our repair offerings within this industry, and to deepen our existing relationships with the existing customers we already support”.

Advanced Technical Services announced today that is has successfully completed an automotive quality audit for a major automotive OEM.

The successful completion of this audit verifies that the Quality Management System implemented and maintained by ATS meets the standards and requirements set by this automotive OEM.

Company President Dave Vikartofsky said, as an approved quality supplier to this customer, we can now participate in any relevant electronic remanufacturing RFQs that may become available in the future.

ATS adds this successful quality audit completion to the list of other automotive and non-automotive quality certifications already in place.

To enhance customer satisfaction, Eltek, a world leader in high-efficiency power electronics and energy conversion, wanted to improve their repair cycle time on rectifier products for customers in North America without further adding staff or expanding facilities.  When the company reached its capacity to repair the rectifier products in a timely way with its existing staff and facilities, it turned to Advanced Technical Services (ATS).

After an initial pilot project was successful, Eltek challenged ATS to reduce the repair cycle times and component scrap rate of another third-party repair firm Eltek was using that was not meeting expectations, according to Jeff Carlson, Eltek Director of Service Support, North America.

“Compared to another third-party repair firm we were using at the time, ATS was able to reduce repair cycle time from 45 days to 10 days,” says Carlson.  “It was also able to reduce the component scrap rate from 60% to 10%, which reduced our cost under warranty and our customer’s cost out-of-warranty.  Their repair processes identified the failed part down to the component level, instead of merely swapping circuit boards. Their willingness to work with us throughout the process helped to make this possible.”

“They have earned more business from us as they’ve proven themselves capable,” says Carlson.  “They have, since 1999, become a trusted partner for repairs in the Eltek North American market, handling a significant portion of our total returns.  ATS handles both current and legacy product models for us and helps ensure we achieve our service targets.”

According to Carlson, ATS has taken on more responsibility for repairs and they have stocked more Eltek product at their facility to help expedite the process.

“To support our customers, they’ll often do advanced product exchanges with our customers from our consignment inventory,” says Carlson.  “Upon our request, they will;

receive, repair, and warehouse the returned product.  They track modules by part and serial number and transmit repair data to us daily, so we can track reliability and improve quality.  They’ll test the product under environmental loads experienced in the field.  Then they’ll repackage the product and ship it directly to our customer.”

ATS is very responsive, and repaired product is rarely returned, which speaks to the quality of repair, according to Carlson.

“They’ve come through for us and have become a valued partner in ensuring the quality of our customers’ experience,” says Carlson.  “Recently, when I asked them to complete a job by next week, they finished the job in two days,” says Carlson.  “That’s the kind of response you want from a partner who supports your end customers.”

ATS President Dave Vikartofsky announced today that the company has implemented flat rate repair pricing on cable distribution equipment repairs for all their MSO customers. Regarding the change, Mr. Vikartofsky said that the ATS management team had been evaluating the feasibility of flat rate pricing for several quarters and felt that now was the appropriate time to implement the change.

He further stated that his company had pioneered flat rate pricing in the early 1980's in the automotive electronics repair business. Flat rate pricing helps our MSO customers better manage their repair budgets and aids in their expense planning processes. Over time, we have developed enough repair history to know what our costs will be in most typical repairs.

Our flat rate repair process even incorporates the replacement of preventative maintenance components that we know are highly likely to fail before they do. Replacing these known high failure rate items helps us continue to deliver the highest level of repair quality in the industry.

Advanced Technical Services (ATS) announced today that they have developed a repair solution for the FLM power supply cradle pictured above. Over time and exposure to the elements, the cradle wires and connectors become damaged from excessive current and overheating. The ATS technical team replaces the damaged connectors and pins and replaces all wiring as required. For more information please contact salesinfo@ats4solutions.com or call 1-800-323-4813. 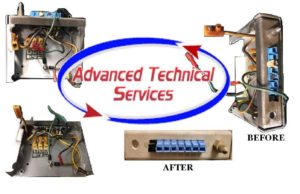 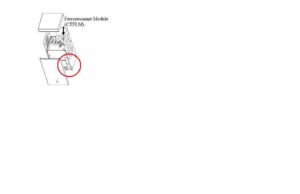 What began as a small automotive radio repair shop on the Northwest side of Chicago in September of 1981 has grown into a full service repair organization that supports customers in the;  Automotive, Cable, Entertainment , Fleet and Telecom industries.

"Our goal when we started the business was to improve the repair cycle time on automobile radio repair in the Chicago area" said company President Dave Vikartofsky. Today our offerings are still focused on minimizing repair cycle times but we also now offer a wider variety of related services that our OEM/ODM customers need including; warehousing, configuration, testing, upgrade, fulfillment,  installation and program management.

It is a credit to our talented and dedicated employees that we have been able to evolve and grow as a company and continually offer new and beneficial services to our customers.

ATS is looking for a project manager to manage & work a CATV power supply upgrade project in West Texas.

The ideal candidate will have extensive experience working in the CATV industry & specific experience in maintaining battery & power supply cabinets in all types of environments.

The project manager / tech must be capable of both working with key customer contacts as well as independently.

Experience managing up to 3 or more technicians would be a plus.

Although this position is specifically for a 3-4 month project it may lead to an offer for full time employment.